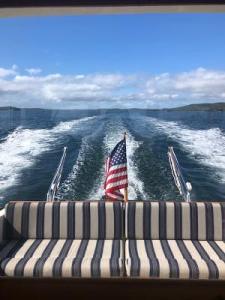 NARRATIVE: This part of Maine was an area we had not experienced by water and it was stunningly beautiful! We spent the first night at Dysart’s marine and had dinner at a fabulous restaurant, Little Fern, inside the Claremont Hotel. It was one of the top 5 restaurants we have eaten in. On our last night back before returning the boat we had dinner at the Marina at the top of the hill restaurant – known for their burgers. On the second day, we headed out for Rockland and docked at Safe Harbor. Again, a winner with a special marina that offered all services plus a beautiful shower, laundry area, restaurant, and free use of a SUV for touring! We had planned to stay only 2 nights but ended up canceling our Camden moorage and stayed there another night. There are 2 premium restaurants in Rockland. Primo (go early and walk around the farm to table gardens) and “In Good Company Downtown” – a small but also farm-to-table restaurant. Last night was spent in Buck’s Harbor, a jewel of a spot! Small tucked-in cove that is quintessential to Maine. A film crew from Portland and LA were filming while we were there to promote travel to Maine so get there before it becomes discovered! They also sell Lobster and scallops right off the dock and the little local market is 1/2 mile away with fresh pastries, deli, and take-out.

INSIGHTS: Chartering from Ellis Charters was a great experience as well. Any questions that we had on the boat were promptly addressed. It was also nice to have the first-night dockage at the Marina to get familiar with the boat.